Sudoku In Space for a Healthy Mind 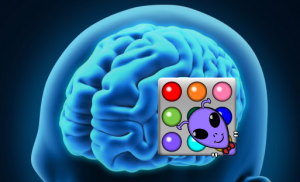 Ever since I was young I found myself fascinated with puzzles. Mainly the type of puzzles where you put things in some sort of order. I didn’t really realize how much I enjoy a simple relaxing puzzle until I finished making Sudoku In Space and started playing it. It has also made me realize my love of puzzles and why I’m gravitating toward making puzzle games.

Puzzles can be frustrating, but at the same time they can be relaxing. Once you get the hang of how to do a puzzle it can provide a meditative experience. Sudoku is a great puzzle for this type of response. It doesn’t take a lot to learn how to solve a Sudoku puzzle, but it does require a lot of your focus and attention. I tend to focus so well on the puzzle that I often don’t think of much else. In this respect it has been great once again playing Sudoku. It creates a nice, simple, and healthy escape. Once I near the completion of a Sudoku puzzle any frustration from the process melts away and I get a nice reward from it.

It’s impossible to control the world and put much order to it. Most people really enjoy order and avoid chaos as it can be a source of stress. Even if you’re not aware of it, nearly all of us are looking to put order to our worlds and avoid chaos and disorder. I feel that Sudoku is a great opportunity to experience this. You can’t control the world but you can solve a Sudoku puzzle.

Sudoku provides a therapeutic relief of stress by allowing you to put something into order. Sudoku In Space attempts to take this further by putting you in an outer space atmosphere with really great relaxing music by Adi Goldstein, twinkling special effects, and unintrusive sound effects. Allen the Alien welcomes you to his world of puzzles in space and I find it hard to stay away too long. Soon we plan to add a story for you to adventure with Allen through the universe so that the game provides a more unique and immersive experience than any Sudoku game has ever attempted.

While exploring my renewed interest in Sudoku I’ve found a plethora of articles on the benefits of Sudoku for your mind. My favorite, the meditative experience, is discussed above, but there are many others which I feel worth mentioning here: 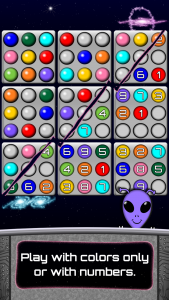 One of the design goals of Sudoku In Space was to make Sudoku more appealing to children and people who don’t like numbers. We provide a small set of 4×4 puzzles so that someone who’s never played can get some experience without being overwhelmed. The space theme, bright colors and cheerful effects are there to give the game a bit more interest than the typical plain Sudoku game where it is just numbers in a grid. I really wanted to try to bring color Sudoku to the forefront with this game, because I know that, for many, just seeing numbers in a game can be a complete turn off. I’ve been pleasantly surprised at how many people are playing with just the colors. It has also been interesting to me personally to see how much faster I can solve a puzzle when the numbers are on because I have both numbers and colors to rely on.

With so many games out there that simply provide distractions, I strongly believe that Sudoku In Space supplies players with more than just a distraction – it strengthens your mind! There’s nothing like improving yourself while having fun. It’s one of my favorite things to do and I hope to share that passion with the world as Napland Games creates more puzzle games in the future. I have many puzzle games planned for you all and I hope that they will be just as interesting (if not more) than Sudoku In Space. The next game I’m working on right now is a “Simon Says” / copy cat style game where you’re tasked with disarming time bombs. I’m not certain that the cognitive benefits will be as great as they are with Sudoku In Space, but I hope that we can provide a fun and challenging experience that also helps to strengthen your mind.